I wrote a blog post some time ago on the planet Eris. Following the political, climatic and geophysical events of the last few months I feel it time to write another. Few astrologers seem to have commented on the nature and influence of Eris and I think this is quite an oversight. In homeopathy the greater the dilution factor the greater the potency of the remedy, which works at deeper levels and over a greater period of time. The same applies to the outer planets in astrology, and Eris is the outermost of all in the solar system.

Saturn is the last planet that is seen with the naked eye, meaning it has the greatest impact on the physical world. Beyond that we find Uranus the first planet representing consciousness with generational influences. Actually, to be totally correct astrologically, we have the captured comet Chiron lying between Uranus and Saturn, which is said to rule healing, but because it rules the sign of Virgo I suggest it also represents science in its true nature of revealing truths. 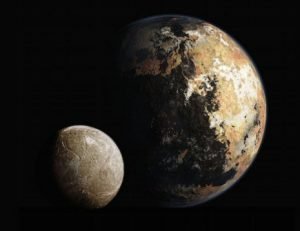 Beyond Uranus comes the giant Neptune followed by the demoted dwarf planet and moon, Pluto and Charon, and finally the tiny dwarf Eris of which we know very little astronomically. The relationships between these outer planets is a commentary on the way things are transforming. They are transforming because the central planet of the outer three is Pluto, the planet of transformation.

However, the main point of this blog is the present, and the patterns that are in action. Eris has been in the sign of Aries since 1927 and will remain until 2049, however at this particular moment Uranus will cross over an exact conjunction with Eris in early March 2017, exactly when the Sun is transversing Aries as well. All this while that conjunction is squaring Pluto in the sign of Capricorn. This means that what astrologers are generally saying is potentised by the deeper influences activated by Eris. 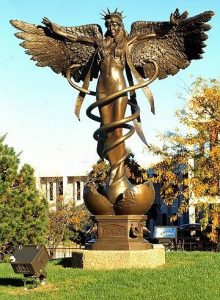 To really understand this we need to remember that Eris was the only Goddess not invited to the wedding of Peleus and Thetis. Peleus and his brother Telamon killed their half-brother Phocus, and that left something that needed investigation (needs to be focused on). Thetis bore the child Achilles and dipped him in the river Styx to give him immortality. Unfortunately she held him by the heel and that left him with a vulnerability. This demonstrates that something can emerge from this relationship that seems to offer safety but which has a serious flaw.

The goddess of discord and chaos, Eris brought a golden apple to the wedding on which was inscribed “to the fairest”. When she rolled the apple into the feasting guests it was fought over by Hera, Aphrodite and Athena. Paris was chosen to decide to whom it belonged. He chose Aphrodite because she promised he would marry the most beautiful woman, who turned out to be Helen of Troy. The “apple of discord” is a euphemism for the crux of a small argument that leads to a great dispute that leads to war. 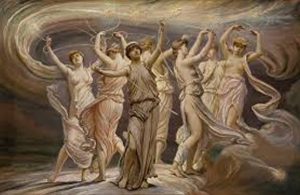 From these you can see what the fruits of Eris’s labour are. How many of these have we born into our world? Yet it didn’t have to be that way. It was only because Eris was barred from the wedding that she bore malice. As I pointed out in my last blog, like all planets Eris has two sides, one is Divine Justice and the other is Divine Retribution. She brings to the surface those things that need to be healed. Something that is covered up will continue to fester until it is exposed or made transparent.

As we enter this new paradigm, and to simplify and de-mystify it, I will say in the age of the internet of things, it is easier to create false flag episodes as well as present exposure. So what happened when Eris entered Aries in 1927? Look it up. 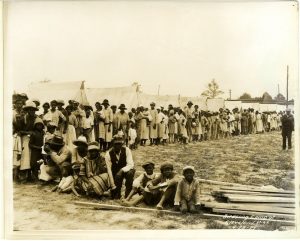 Here are some of the interesting things. In China an earthquake measuring 8.6 on Richter scale struck Xining, killing 200,000 people. More major than the meagre ones happening now. Josef Stalin took control in Russia and expelled Trotsky. Stalin took charge of the death of between 34 to 49 million people. The greatest national disaster in US history was the Great Mississippi Flood which affected 700,000 people. Water flooded an area of twenty-seven thousand square miles. Staying with the US, striking miners from the Columbine Mine were massacred with machine gun fire at Serene by Colorado State Rangers. In Britain, a 1000 people a week died from an influenza epidemic, and the list goes on. 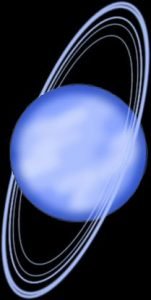 It is also interesting that in 1927, Uranus was also conjuncting with Eris even though Eris had not yet come into human consciousness. At that time, Pluto was not in the picture at all, whereas it is now the focus of what is known as a T-square. Jupiter is opposing Uranus/Eris, with both squaring Pluto. Pluto being the planet of transformation tells us that in order to move forward, to evolve, to expand our position (Jupiter), we have to come to terms with a radical shift (Uranus) towards bringing in the principles inherent in the Aquarian age, being Responsibility, Accountability, and Transparency. If we cannot make that radical shift then Eris’s daughters will make their presence felt even more.

How you choose to interpret this in line with the present situation around the globe I leave up to the individual. I have noticed that world events are systemic consequences of national ones, which arise from very personal experiences and actions. The reality is that we all do get what we deserve. Events occur, but it is how you choose to respond that matters. There is a story told about Gurdjieff who was in Paris during the Nazi occupation. Asked how it was for him, he replied “what are you talking about? What has this to do with anything?” He continued to live and continue his work as before. There might be disruptions, but this is to be expected as Eris brings in the needed justice, or the retribution. As I mentioned in my previous post, the statue of Eris has always stood on top of the Old Bailey courthouse in London.

So what does this mean in practical terms? What predictions can I make? Many people are looking for predictions as a way to defend and protect themselves from what is going to happen. Actually, the only thing that is going to happen is what you create for yourself. At this time too, so many people are struggling to get into their hearts, as if this too is the solution. Accompanying this is the idea the head, thinking, is the trouble maker, that the heart is all about loving and not also about desiring. If you were to distinguish between the two wouldn’t that require the head? You can have the best intentions, the most profound realisations, the most loving feelings, but unless you put these into practice then how useful were they? The old saying is so true; “the streets of hell are paved with good intentions”.

Eris brings this to the foreground. By our own actions will we be judged. With the unexpected influence of Uranus, Eris delivers to us instant karma. It is not for us to worry what is another’s justice, only that we stay present and responsive. Eris will bring what is personally needed, never fear, unless you are being dishonest with yourself or others.

If this article resonates and you want engage in a deeper self-inquiry then sign up for the free 28-Day Toltec Challenge. This is simply an introduction and a taster into an ancient tradition. As you progress you will have an opportunity to commit to what is traditionally called a Path with Heart. This “heart” is not an idea, has nothing to do with chakras, or emotions, this “heart” is a description of the very core of being, the centre where you and the universe are One.